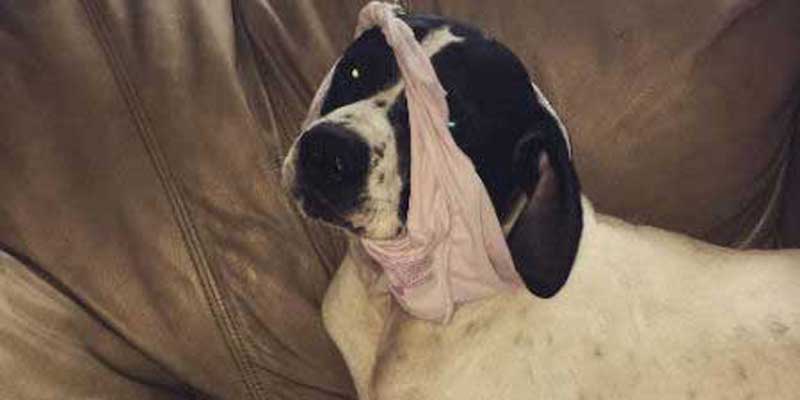 Bad Dogs, Bad Dogs. What’cha gonna do?  What’cha gonna do when they come for you?  Ironically, I actually received a D.I.P. citation because of the Cops theme.  It was a Friday night in April at a huge party a long, long time ago.  One thing led to another, and the Police arrived to put an end to the festivities.  Unfortunately the band’s microphone was still on and I thought it was a great idea to start singing the Bad Boys Song.  Who though being funny was illegal?

I believe my 8 year old daughter put it best when she said, “it’s too hard to be good!”  It really is easy to be bad, you just do what comes naturally to you.  Especially if we are presented with an opportunity.  Which is pretty much what happened to every dog down below, acted naturally when the opportunity was presented.  I take that back, all of them except the Panty Bandit.

So it looks like these bad dogs were in the wrong place at the wrong and all the elements aligned in the universe to create the perfect crazy storm!  As a result we get to enjoy some of the wackiest dog shaming posts we’ve had.   To put it differently, these Funny Dogs are off the chart!  This is the MOTHER of all Dog Shaming posts, with some of these bad dogs creating some of the best dog shaming pics that we have seen in awhile.  This post was one of the hardest to work on because I couldn’t stop laughing!  The signs are awesome.  Antics crazy.  And the dogs–sheer shameful!

Wow! One Instagramer made the comment that it looks like this dog was partaking in some Mary Jane before this picture was taken. That would explain the 22 granola bars and the “I could Care Less” look. 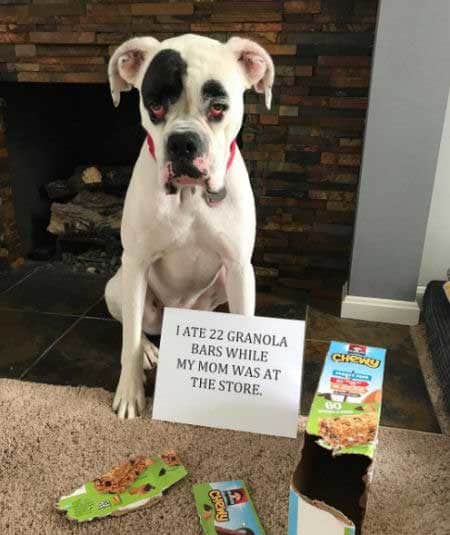 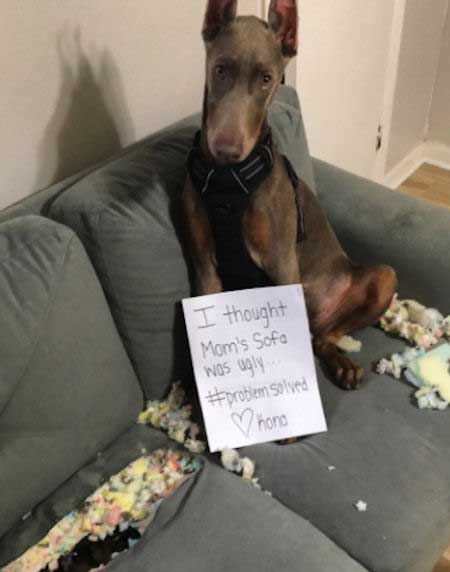 Do you think the below picture was a one time occurrence, or do you think this dog was peeing on the kid for awhile? 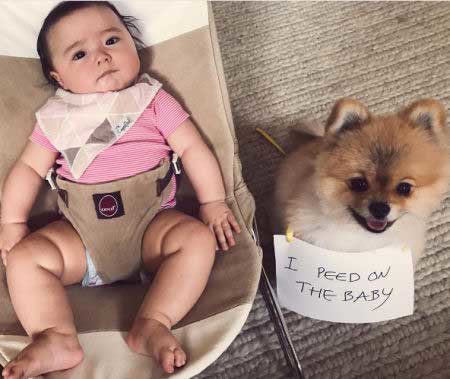 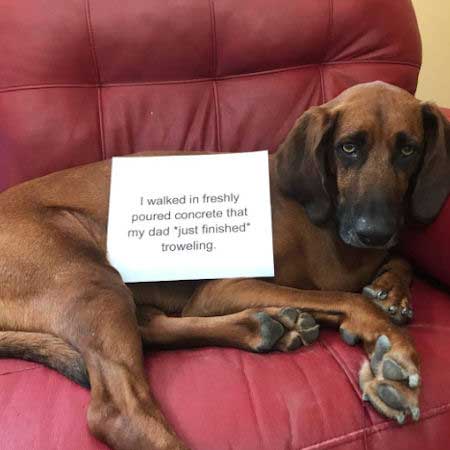 There could actually be another dog shaming pic in a few hours. 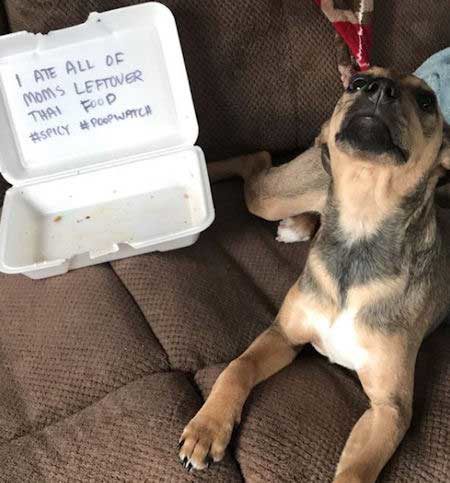 If you love it when Labrador Retrievers are bad dogs then be sure to check out, Even the Most Popular Dog Screws Up. Labrador Dog Shaming! 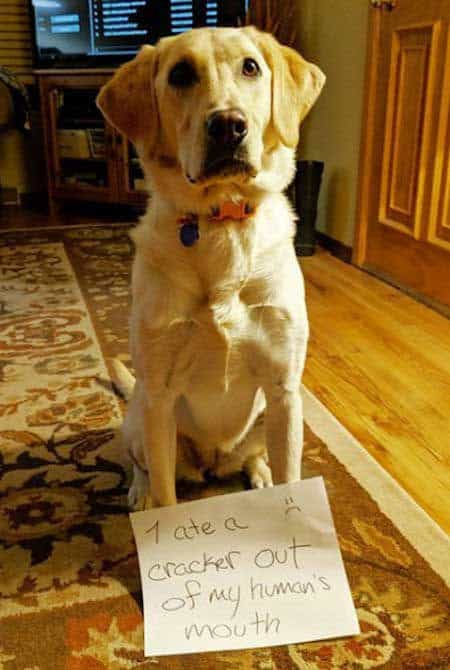 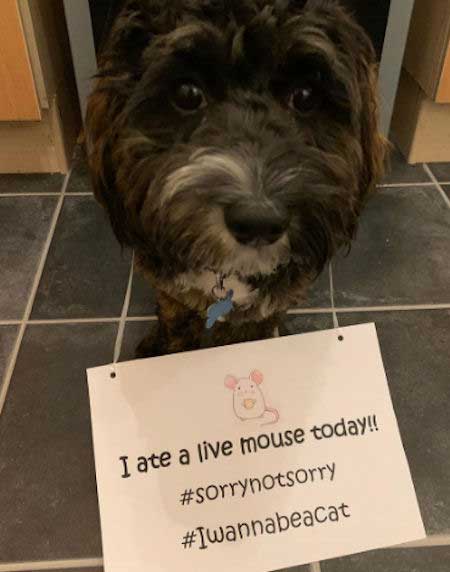 Mommy and Daddy left me alone for Dinner, so I had to make my own!

Sorry Buddy, but I think you are in the wrong room to be making dinner, it looks more like the bathroom to me. 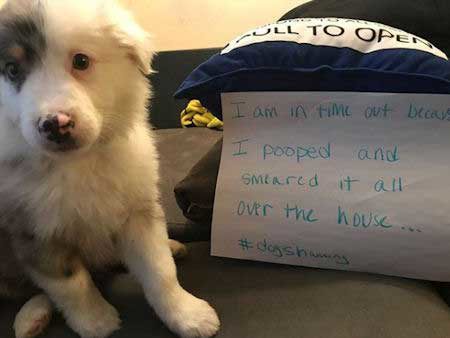 Look at that face and those eyes, this can easily be considered one of the best dog shaming pics! 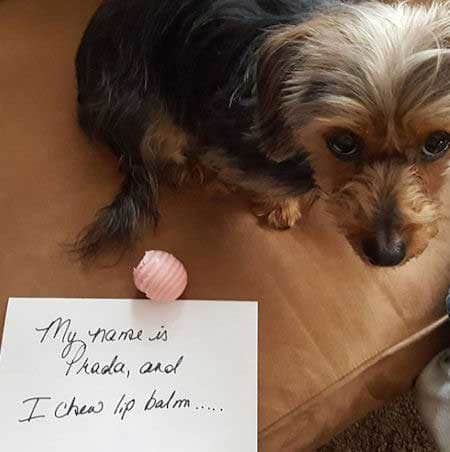 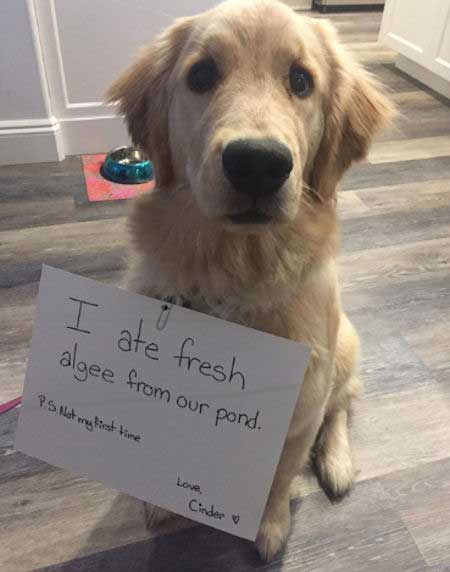 Maybe the dog is only trying to make a point about too many carbs in the house. 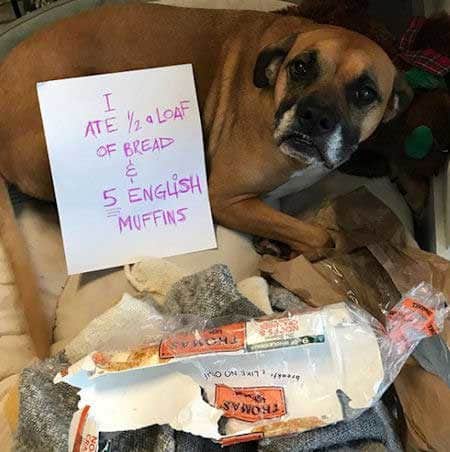 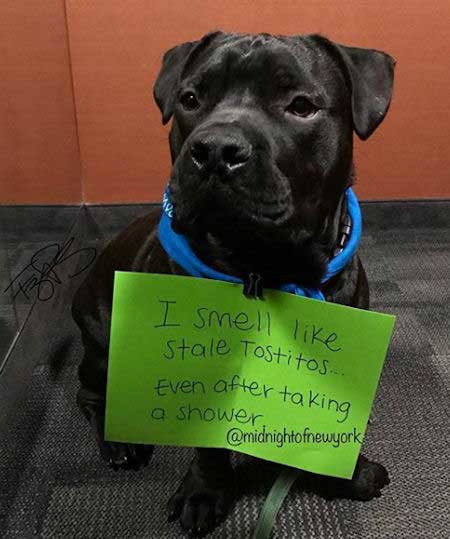 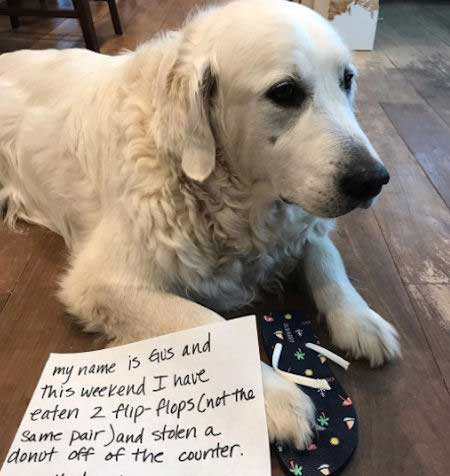 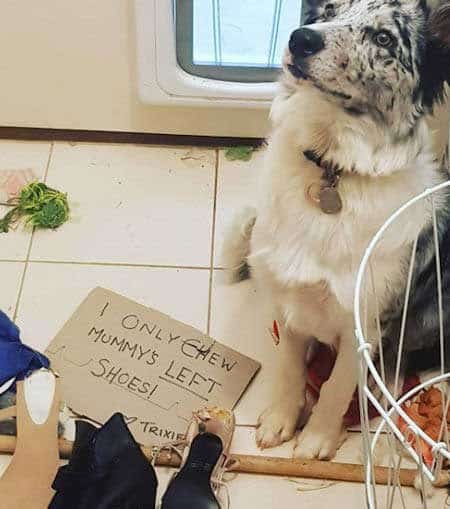 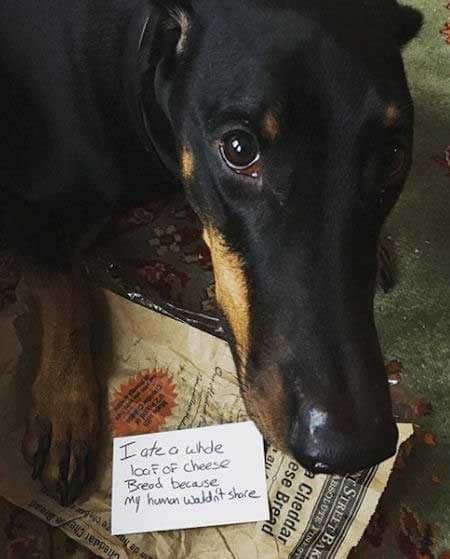 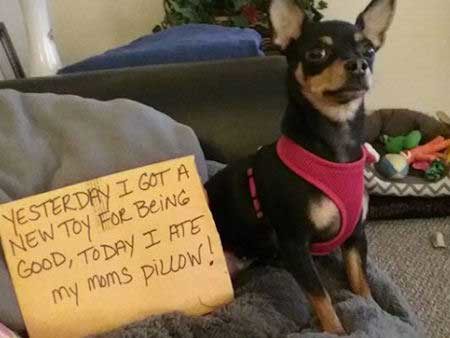 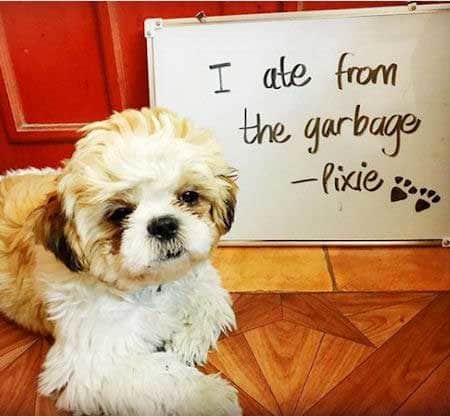 So did these goofy antics make you laugh?  Bad Dogs are the best!  As long as you don’t have to clean up after them.

Do you need some more BAD DOGS?

We also have more pictures of Dog Shaming and a ton of other kinds of Dog Pictures. 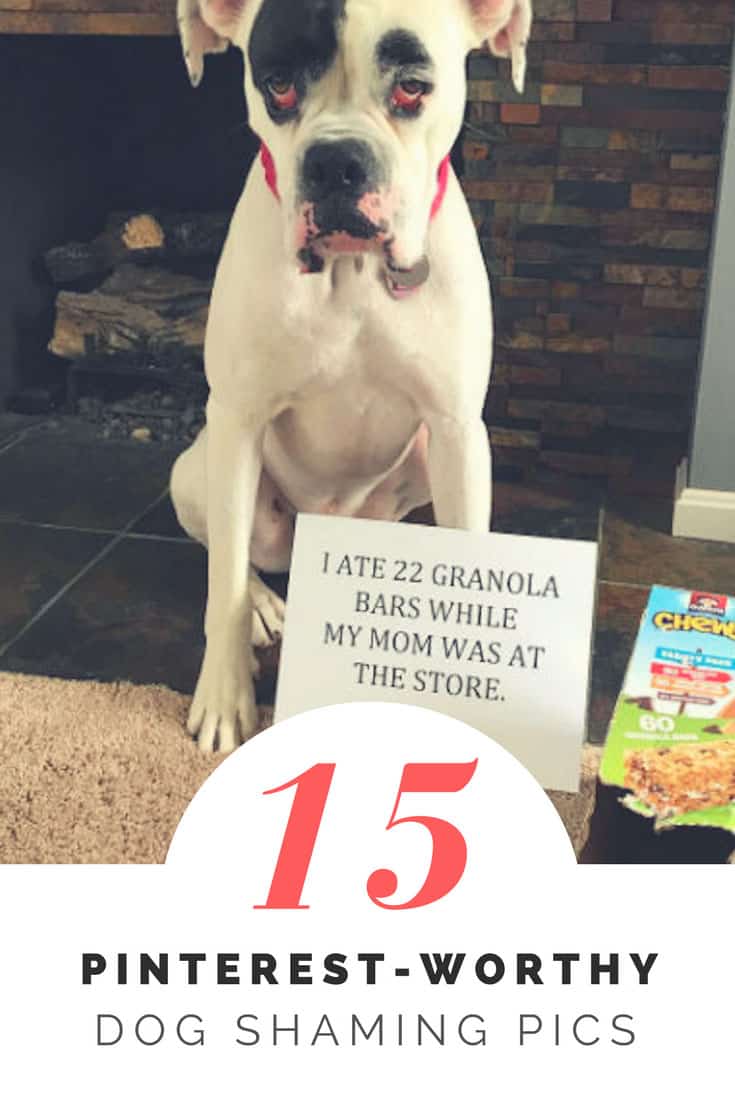 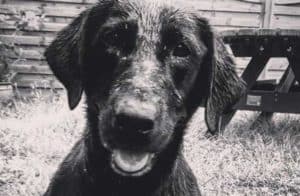 If you have a pack member that needs a laugh break, then be sure to tell them about us! 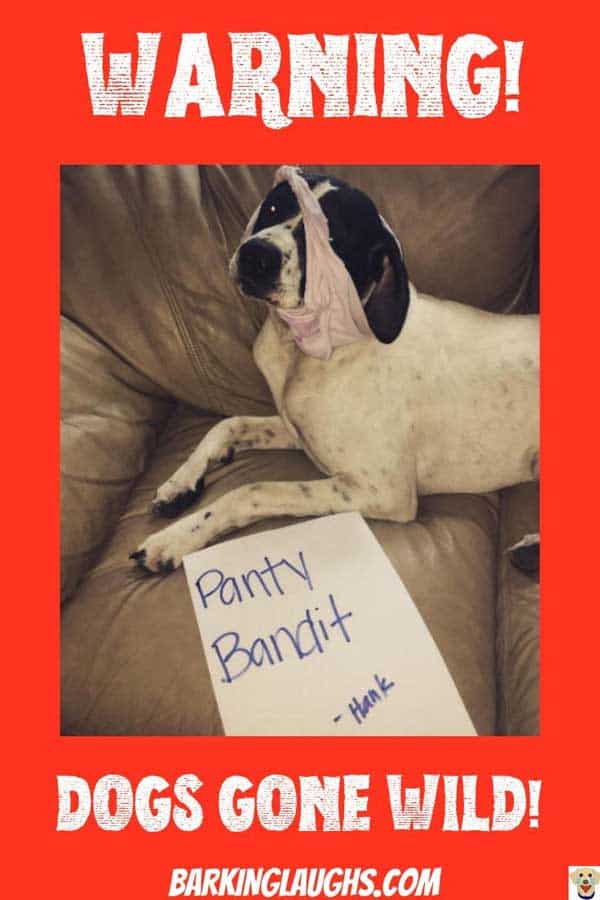 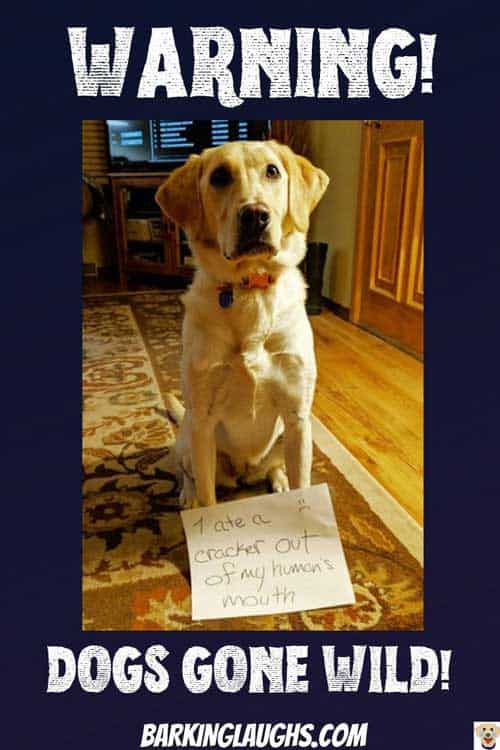