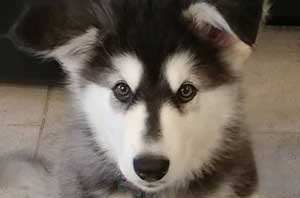 The Malamute puppy is awesome!  This cool pup comes from the Artic region.  They had a lot of stuff to do up there.  They use to hunt seals and chase away bears.  Not just bears, but Polar Bears!

Even though they have a prey drive, that trait only holds true for animals.  When it comes to people they are charming.   Which is great, considering how cute they look as puppies.  Then again, they look pretty awesome as dogs too.

Look at the paws on this Malamute Puppy! 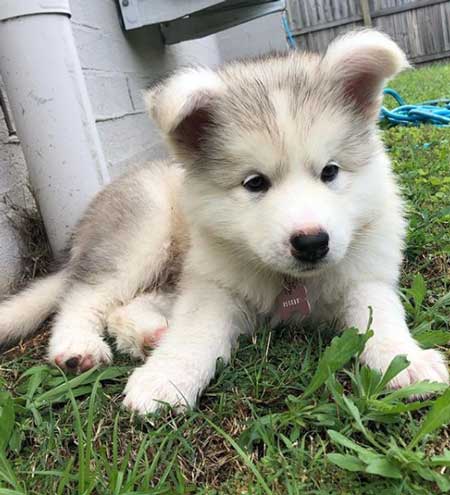 Mals have been around for a long time.  For this reason, they have a rich history.  Below are some interesting and 10 awesome Mally facts.  Of course, there are a lot of pictures of malamutes.  We also added a couple of vids!

In case you missed it, the nicknames for this breed are Mal or Mally.  I hope you enjoy our Alaskan Malamute Puppies post.

The coloring of their coats is wicked. 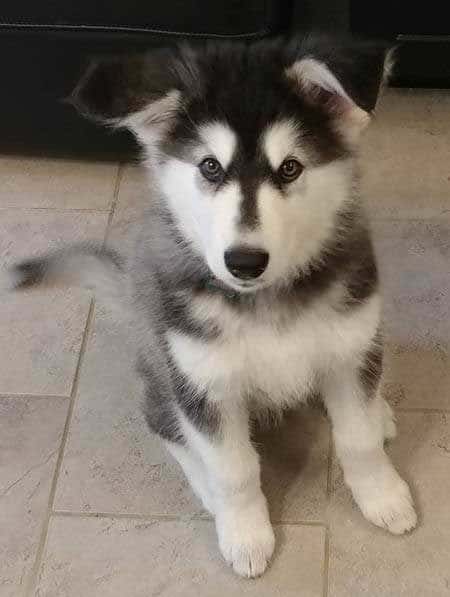 Learn 10 quick facts about this cool dog.  Not only will you learn some facts, but there are pictures of Malamute puppies throughout!

All these pups are so cute!  Can you pick a favorite?

I’m shocked that their is still food on the floor. 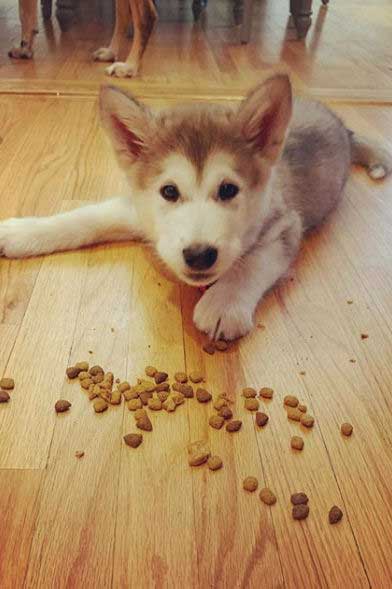 Some believe that the Mally is one of the oldest dogs. An ancestor of the current breed may have crossed the Bering Straits with the nomads. The Malamute name comes from an early Alaskan tribe, the Mahlemuits.

Because of this early commute, the Mal is very unique.  It makes them the only AKC breed that is native to the United States.

Look at all the fur on this Malamute Puppy. 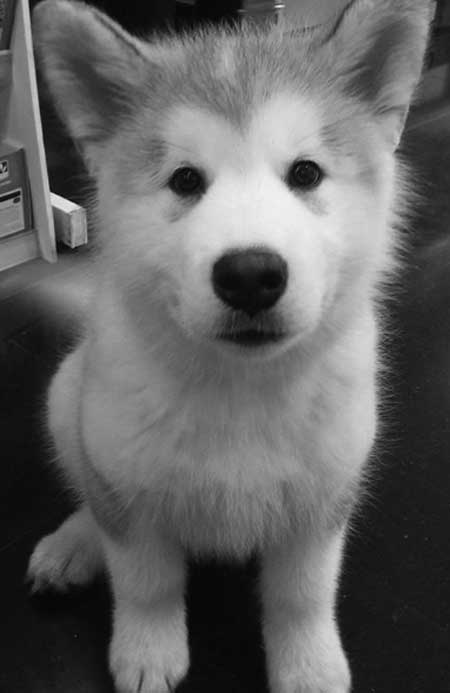 Mals do look like a lot like wolves. Because of that, many Mals played wolves in movies.  As a result, some people believed that they share a tight bloodline.  However, all dogs share a large amount of DNA with wolves.

Look at those puppy eyes! 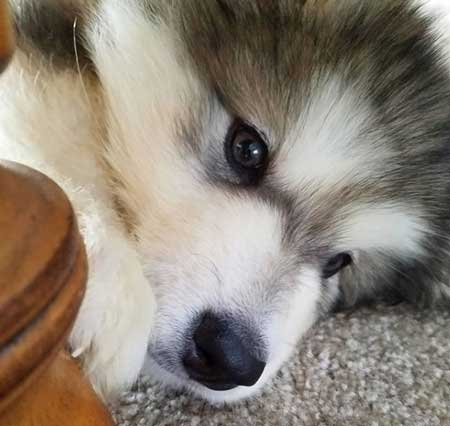 Because of their dense double coat, a Mally can survive cold temps.  They can handle temps of -70 F or -56 C.  That is crazy!  I can barely handle single digits. 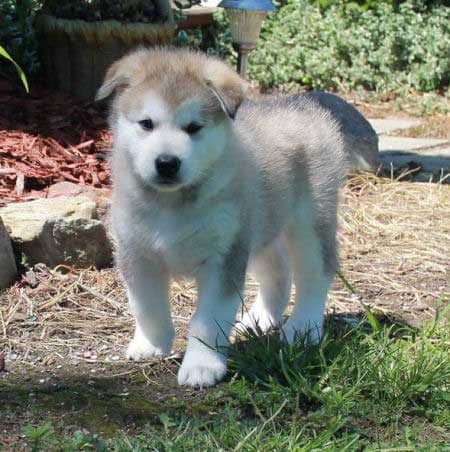 The Mally was active in the settlement of Alaska.  Back in the day, there were little roads and the land was rough. The Mal was a key in their transportation. They helped move people and supplies throughout the region. 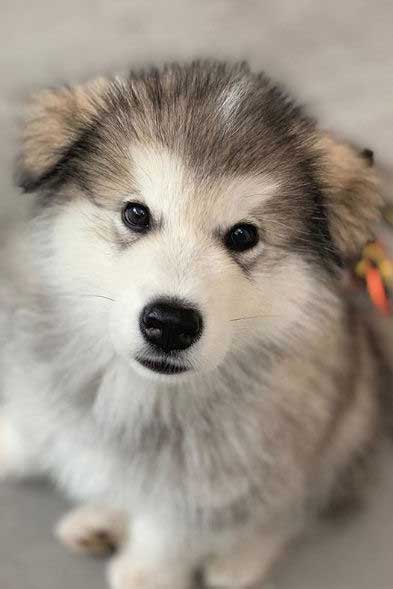 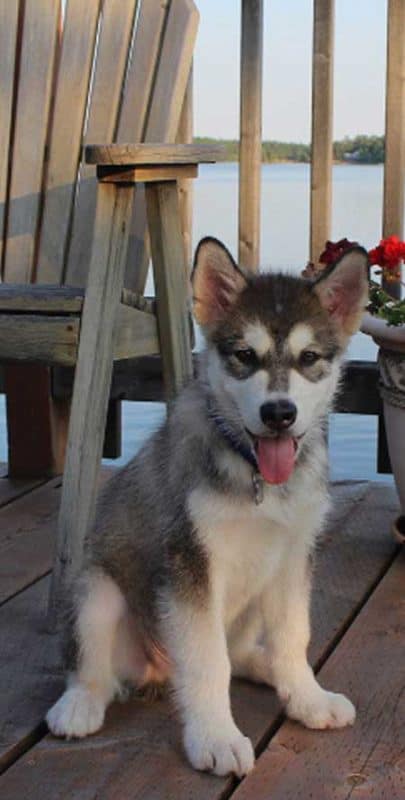 During the Klondike Gold Rush, the Mals were vital for the prospectors. Mals helped them move their supplies.  They also kept other animals away. 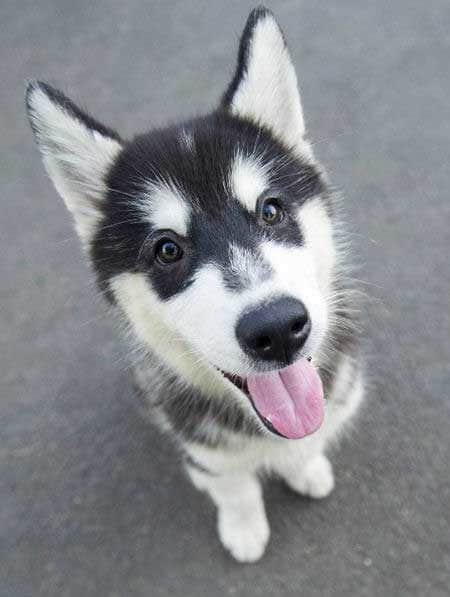 Admiral Byrd chose the Mal to help with his trip to the South Pole. Because they could also pull the heavy loads across the large distance, it was a good choice. And since their coat was thick, loved cold temps and were used to living outdoors the choice was great.

Puppy Smiles are the best! 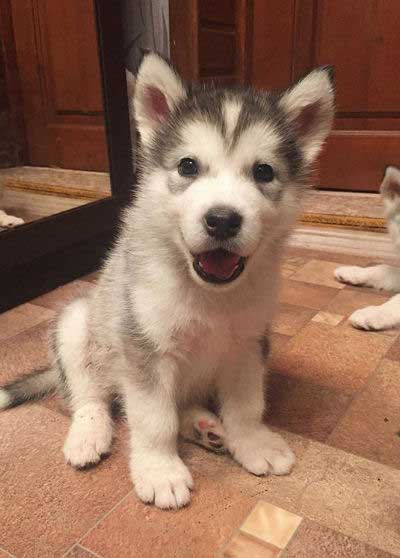 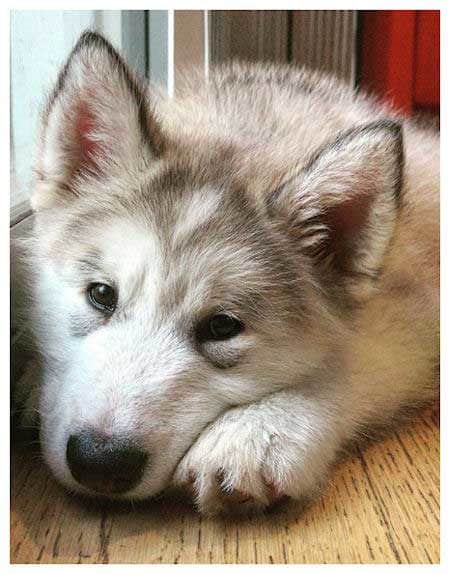 Malamutes were part of the arctic sled dogs that saved the town of Nome in 1925. You can read more about this incident, Meet the Dog that Once Saved an Entire Town!

Look at those sharp puppy teeth.  Do you think this Malamute Puppy eats more than metal? 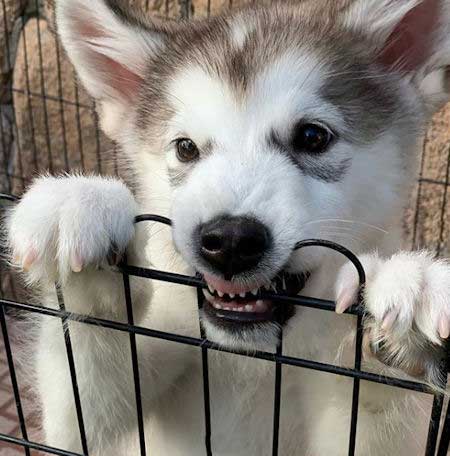 During WWI, the Mals would help get supplies to troops in hard to reach regions.  They mainly served with the French Army. 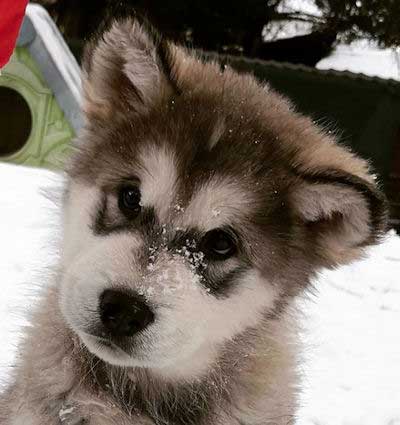 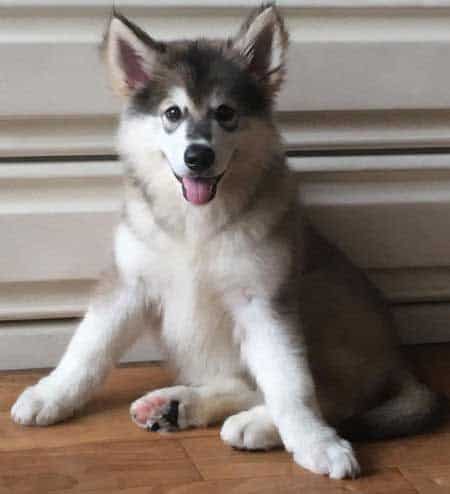 During WWII, Malamutes held a lot of jobs.  They helped move supplies.  Mals also were used in search and rescue.  Plus, they helped look for landmines.

Along with the South Pole trips, almost all Mallys were loaned out during the 40’s.  This almost became a nightmare.  At one point, only 30 Malamutes existed.  So, because of their skills, the breed was almost wiped out! 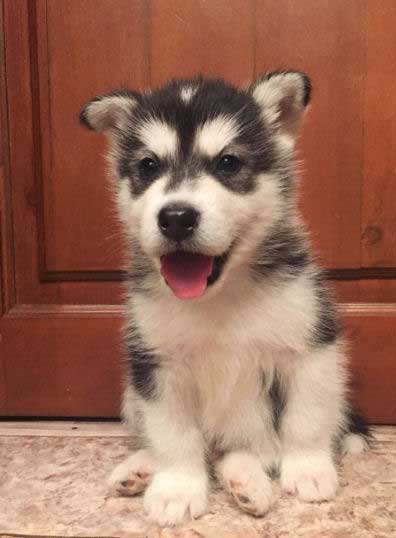 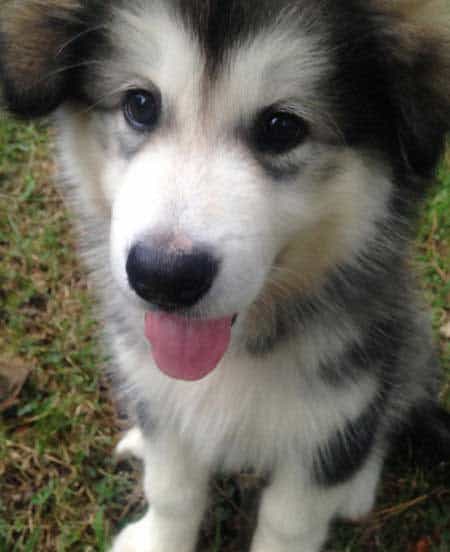 What Movie Icon is based on a Malamute?

When George Lucas was writing Star Wars, his faithful Mally sat by his side.   He wanted Han Solo to have a faithful side-kick like his dog.  With that, CHEWBACCA was born.  Chewy is based on his Alaskan Malamute, INDIANA.

So, does a dog named Indian sound familiar?  Let us leave you with this dialogue from Indiana Jones and the Last Crusade.

These guys are too cute!  I could not imagine being in a room with more than one. 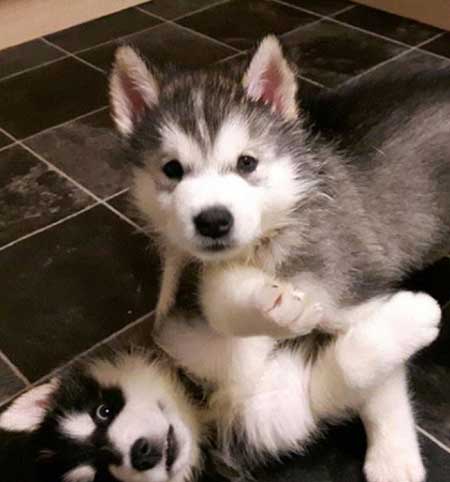 Giving these guys a bath must be an adventure. 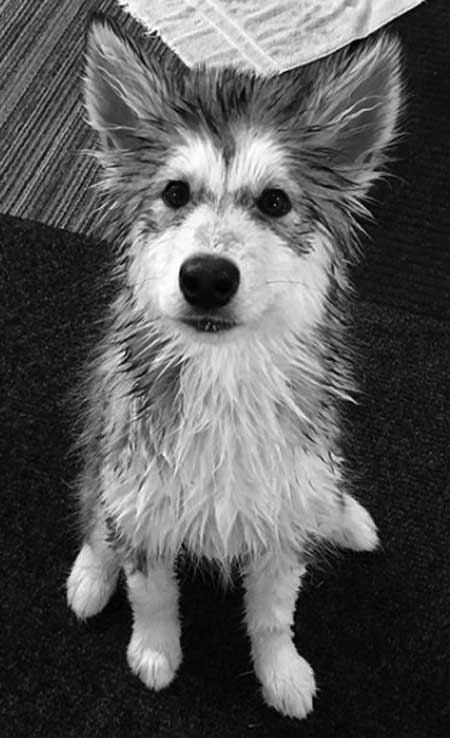 When this picture was taken, Blizzard was six months old.  Obviously, these dogs grow big fast. 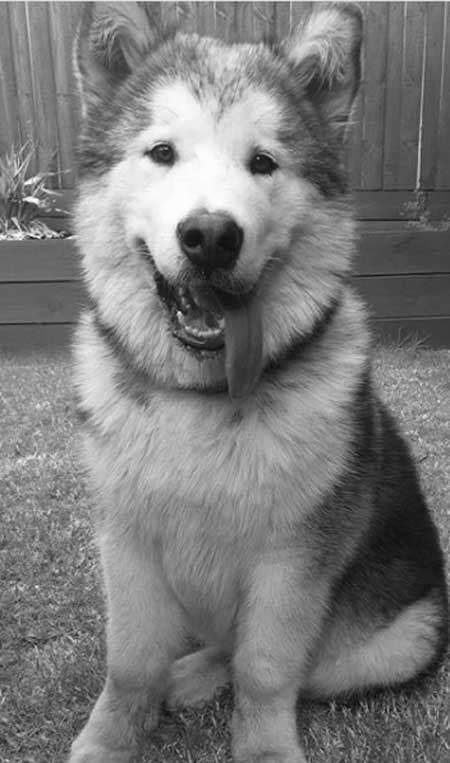 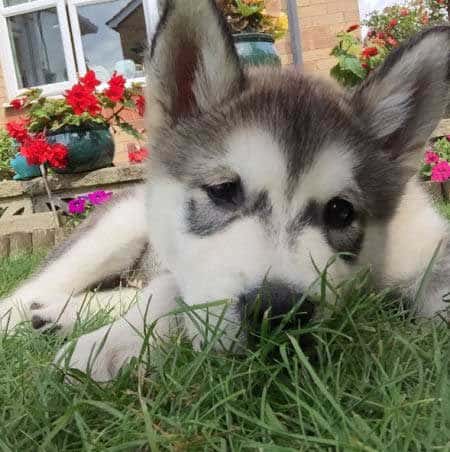 Kavik still has a way to go before mastering hide and seek. 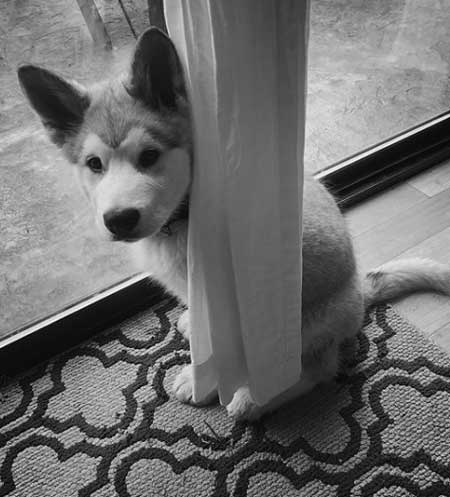 These two will cause a lot of confusion at the dog park.  Of course, not mixing the two up, but calling the Mally a Husky. 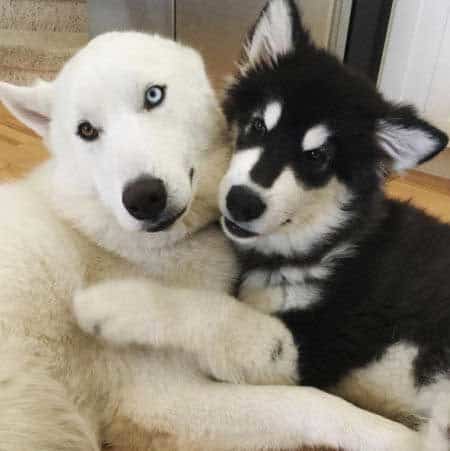 It’s one of the biggest pet peeves of all Mally owners.  Though they share some similar traits to Huskies.  Mals are generally bigger.  They also never have blue eyes.  In fact, having colored eyes is a disqualifying trait for the breed.  There are other differences as well, but we’ll save that for another post.

German Malamute or an Alaskan Shepherd?

As a bonus, we have a small little confession.  One of the above puppies is not a pure Mally.  It is actually a cross between a German Shepherd and an Alaskan Malamute.  Would that be a German Malamute or an Alaskan Shepherd?  Regardless, I cannot imagine how wicked cool that dog is going to be!  Given that they both have some crazy habits, this dog is going to be wild.

Do You Need More?

In the event that you want some more Mally.  Then be sure to check out the above Instagram accounts.  You will be in Malamute paradise.  Also, we have some great videos!

If you really want to laugh while watching this video, then grab your dog and crank up the volume!  When I did this with my dog Cali, I got all different kinds of emotions.  The first was the total look of confusion, followed by excitement and finally aggression with a couple of worthy growls.

If you’re thinking about getting a puppy but don’t know what to name it, then check out or puppy naming section!

This is a cute video. I just wish it was in HD.

If you know someone that would love these Alaskan Malamute puppies, then be sure to share this post.  Generally speaking, sending this post to a friend in an attempt to make them happy, does counts as a good deed.

If you need a quick laugh, then check out these dog sayings!

If you need some more fur babies, then check out these popular post!

It is Time for Puppers! 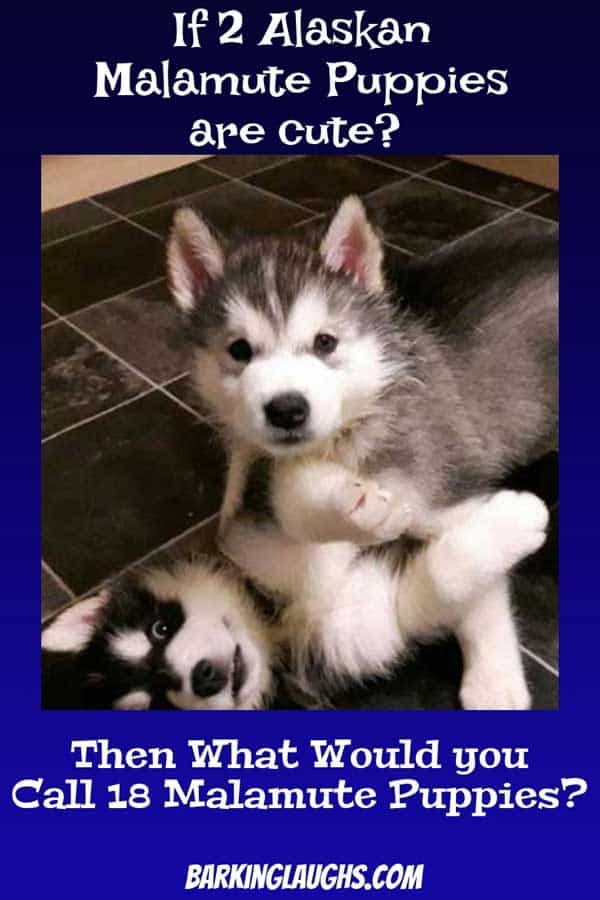