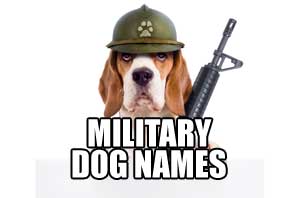 Are you looking for some cool military dog names for your new best friend?  We have some awesome ideas for you to look through.  Naming a pooch is tough.  We know this, so we tried to make it a little easier for you.

Below, you will find both male and female military dog names.  Also, to help you decide we have the meaning.

The names we have listed have come from different areas.  We have included ranks, weapons, bases, and vehicles.  Additionally, we grabbed some traits known by the armed service.  There are also some common slang terms.   Not to mention several names are from the NATO Alphabet.

I’m not going to lie, but the girl section was hard.  However, I think we got some solid choices 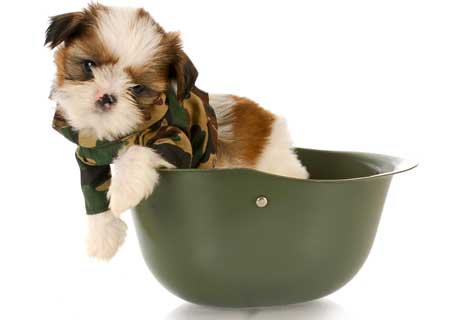 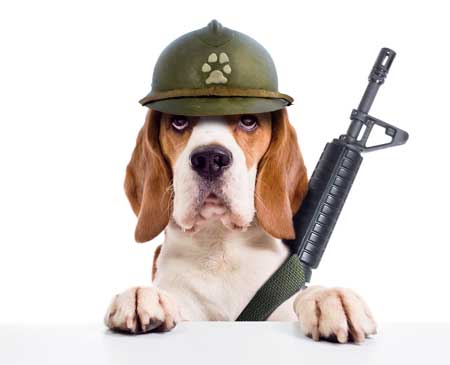 Army:  Army is the military branch that battles on the ground.

Bliss:  This name comes from the Army Fort Bliss.  It is located in the El Paso area of Texas.

Cadence:  A Cadence is used during marches, drills, and running.  This is a request and response song.

Charlie:  Charlie is the letter “C” in the NATO alphabet.

Christi:  Many WW II pilots trained at Corpus Christi.  These pilots were in the Navy.

Delta:  In the NATO alphabet, Delta stands for “D.”   Also, Delta Force is an elite military unit.  This unit is in the Army.

Echo:  Echo stands for the letter, “E” in the NATO alphabet.

Fallon:  Fallon comes from the Naval Air Station Fallon.  It is located in Nevada.  It is the home of the TOPGUN program.

Foxtrot:  Foxtrot stands for the letter, “F” in the NATO alphabet.   I would probably just shorten it to Fox.

Gauge:  This unit of size is linked with firearms.   Gauge is the barrel’s internal diameter size.

Glory:  The nickname of the American Flag is Old Glory.  Also, the word glory is often used in wars.  Glory is the honor and the praise after a winning battle or deed.

Grace:  This name comes from US Navy Rear Admiral Grace Hopper.  She created the first programming language while she was serving. 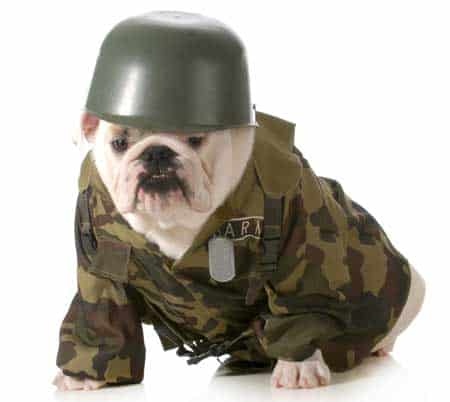 Honor:  This word has many meanings.  Soldiers place this virtue above all else.

Hopper:  US Navy Rear Admiral Grace Hopper was a key naval officer.  Her inputs were so crucial that there was a ship named after her.  The USS Hooper was a destroyer.

India:  India stands for the letter, “I” in the NATO alphabet.

Juliet: Juliet stands for the letter, “J” in the NATO alphabet.

Kimber:  This is a gun that is used by NATO and the military.

March:  A March is an organized movement that is done by militaries.

Navy:  The Navy is the branch of the military that battles on the water. 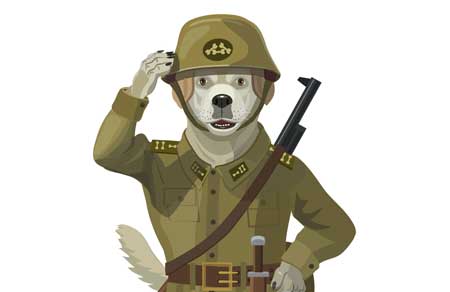 Parris:  This name is for the Marine Corps Recruit Depot Parris Island.  All enlisted males that live east of the Mississippi are trained there.   Also, all-female recruits nationwide are trained there as well.

Ricochet:  Ricochets occur a lot during gun battles.  If you shoot a bullet, it can hit a hard surface.  When the bullet skips or bounces, it is called a ricochet.

Scout:  This is the person who travels ahead and alone to gather intel.  A Scout helps avoid potential dangers.

Semi:  The Semi is a gun that fires one bullet at a time.  By design, it reloads itself.  The US had a huge lead because of this technology in WWII.

Sierra: Sierra stands for the letter, “S” in the NATO alphabet.

Tinker:  Tinker Air Force Base is a major base for the USAF.  It is located in Oklahoma.

Tyndall:   Tyndall is a major Air Force base in the Florida panhandle.  It is the first home of the F-22 Raptor.

Viper:  The US jet, F-16 Fighting Falcon, is called the Viper. 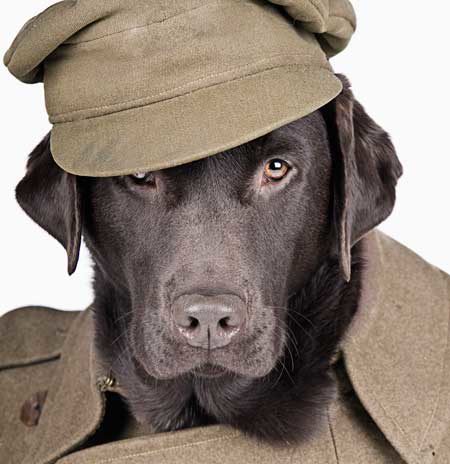 Ace: In the military, there are sniper, tank, and pilot aces. If you take down many enemies, you earn this name.

Admiral:  The leader of a Navy is an Admiral.

Bazooka:  I would probably just use Zook.  A hand-held rocket launcher is a Bazooka.

Black Hawk:  I would probably just use Hawk.  The Black Hawk is a helicopter that has been used by the Army since 1979.

Bomber:  A bomber is a plane.  Bombers drop missiles and bombs.

Boomer:  A ballistic missile submarine is called a Boomer.

Bravo:  Bravo stands for the letter, “B” in the NATO alphabet.

Bullet:  A bullet is a projectile that is shot out of a gun.

Captain:  Most military branches have Captains.  A Captain is a rank.  Also, the boss of a ship is the Captain.

Chief:  Most branches have Chiefs.  A chief is a rank.

Colonel:  Colonel is the highest rank under General.  Colonels are in the Army, Air Force, and Marines.

Colt:  Colt is a gun maker.  The military started using their guns during the Civil War.

General:  The top rank an officer can get is General.  They are in Marines, Army and Air Force.  General is a top officer for the Army, Air Force, and Marines.  There are four different ranks for Generals.

Gunnar:  Gunnar has the meaning of, “Soldier or Fighter.”  This name is from Norway.  This would be a great name for a German shepherd. 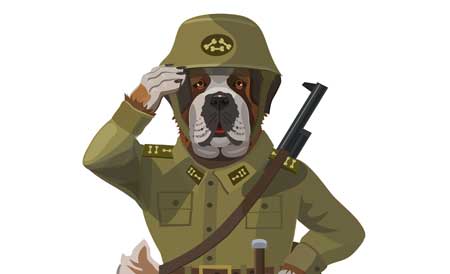 Helo:  A nickname for helicopter is Helo.

Hero:  A military hero is every soldier and Vet.

Hunter:  A Hunter is a soldier that hunts for targets.  These targets can be people or places.

Jet:  A jet is the name of a plane that is powered by jet engines.

Kilo:  Kilo stands for the letter, “K” in the NATO alphabet.

Laser:  For the Military, Lasers can be used as weapons.  They are also used as guidance for targets.

Major:  In the Marines, Air Force, and Army, a Major is Officer ranking. 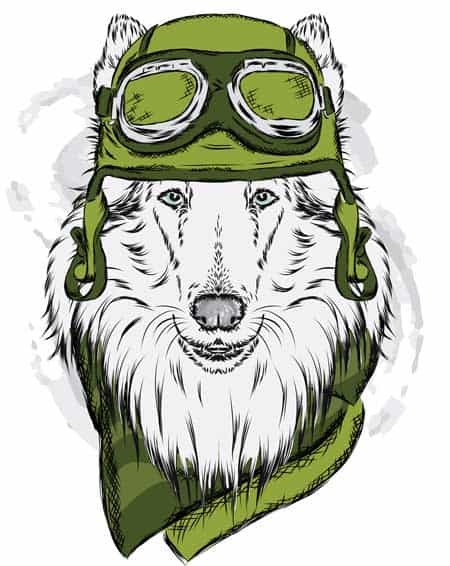 Radar:  Radar is a tech that enables the Military to track the enemy.

Ranger:  This is for the United States Army Rangers.

Rocket:  When a vehicle or a missile is powered by a rocket engine, it is a rocket.

Roger:  Roger means, “I have received your message.”  It is used when the military communicates over the radio.

Sarge:  Sarge is slang for Sergeant.

Sergeant:  In the Marines, Air Force, and Army, a Sergeant is enlisted ranking.

Stryker:  When you need firepower and mobility, the Stryker is your only choice.  This vehicle has 8 wheels and is armored.

Tank:  Everyone knows what a tank is.  If you have a big pooch that will run through things, then this is the name for you.

Taser:  A Taser is a weapon that immobilizes a person with an electric shock.

Whisky:  Whisky represents the letter, “W” in the NATO alphabet.

Yankee:  Yankee was slang for Northerners in the Civil War. Yankee also stands for, “Y” in the NATO alphabet

Zulu:  Zulu represents the letter, “Z” in the NATO alphabet.

Are you still confused?  There are a couple of steps to make this easier.  Write down your top five choices.  You can also print this page out and starting crossing off the ones that you don’t like.  Either way, get a top-five list.

Once you have that list then it’s time to play pretend.  Start with one name and pretend that you’re calling your new pup.  Open your back door and yell that name.  If a name doesn’t fit, then cross it off the list.

Keep doing this until you have either two or three names.  This next step is important.  Most people end up shortening their pooches name or they come up with nicknames.

Come up with a few options that would probably happen.  Are there any deal-breakers for you?  Here are some examples.

Hopefully, you have one or two names left.  The best piece of advice would be to let it stew for a few days.

I hope you found a good name for your pup.  If you need more options, then check out the links below.  Before you write that name on a collar, be sure to look at all our names. 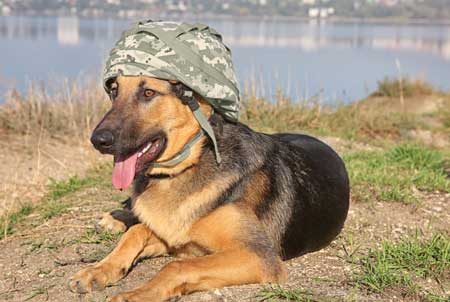 Where did these Dog Names Come From?

These names come from some common military traits and lingo.  As well as the names and nicknames of weapons, vehicles, bases, and ranks.  If you like a name be sure to double-check the meaning.

What are some cool Army Dog Names?

What are some good Navy Dog Names? 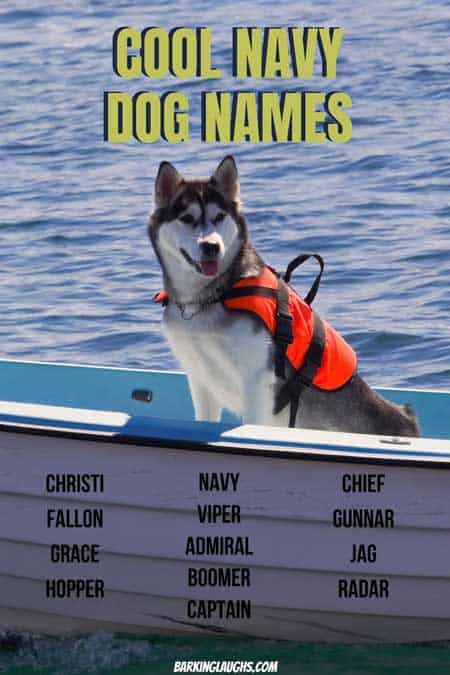 If you are getting a new pup, then get our Printable Puppy Checklist! 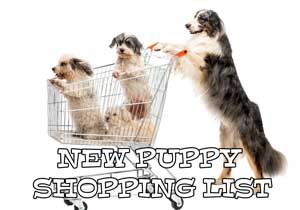