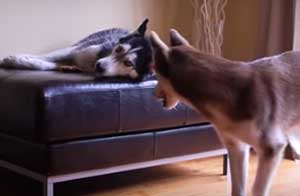 Sometimes you just a few videos to laugh at.  This post should wet your whistle, so you can get your bark on.

I know most of you are thinking, “Dog and Pup Town, your humor is so witty.  Do you really need to fallback on dog farting for some laughs?”  No, we don’t, but let’s face it, farts are funny and they have been ever sine the caveman discovered lettuce.   In a small cave in South America they actually discovered primitive caveman drawings of the “pull my finger” game.   Additionally, if you want a kid to stop crying and crack a smile, nothing beats an armpit fart!

Now take that old faithful fart humor and throw in our favorite 4 legged pals and you end up some good old belly laughs.  Dogs and flatulence have been going together since before the AKC opened their doors.  How many human farts do you think were blamed on the dog?  Truth be told, being able to blame the dog, is one of the benefits of having a dog.  So sit back and be glad smell-a-vision hasn’t been invented yet as you watch these 5 Dog Fart Videos.

Source: Dog Flashes His Owner With A Smile After Releasing A Fart by AFV

Wow!  Even the dog knows that farts are funny!

If you’re feeling even a little bit down, these little tooters will make you smile.  The next two videos show that sometimes toots aren’t a laughing matter.  These two dogs have no idea what’s going on and the results are funny!

Source: Boston Terrier puppy scared of her own fart! by moxie_girl

There is a reason that my daughter nicknamed our dog, Toot.  To be honest, I have no idea what the reason is, but it makes her laugh.  A fact of the world and throughout history, kids love fart humor and kids love dogs.  Add all three together, you get instant entertainment, maybe not for the participants but for us.

The next two videos show a tit for tat situation, or should it be a toot for toot situation.  Victims do not appreciate the environmental assault.

I feel bad for that dog.  Not only did he just lose pack order status in that house because of the new baby, but all he was trying to do was take a nap.

Source: Little girl scolds Great Dane for farting on her bed by TwoDanesandTwoSisters

I really don’t think Willow cares what the human is saying.  Let’s face it, a Great Dane can pretty much fart where they want fart.

Husky Videos always end up on my list of the funniest K-9 vids.  What is it about them that they can create such compelling vids?  I can literally spend days watching their clips.  It so addicting and such a dark rabbit hole once you start.  Lucky for you, I found these funny 7 clips that should satisfy.  As you will see in these funny talking dog videos, Huskies are the best talkers.

Why does this conversation seem so familiar?  Oh yea.  I had the same talk with my wife last Saturday at 11 am when I decided to take a nap.

Always assume competence when you are around a Husky.  Mishka not only knows what you are saying.  She also knows how to respond in this funny canine clip.  She has an answer to every question that is asked of her!

This funny canine clip will no doubt go down as a classic.  Mom and Dad wanted to go on a date, so they told their Husky, Blu, to go to bed.  Instead, he ate the bed. When the parental units came home and questioned the mess, Blu blamed them.  Of course, I side with Blu.  How dare his parents leave him out of the pack!

Another Husky Talking Back

The name of this funny talking Husky is Jager.  Wow! This kind of whining reminds me of bath time at my house and I’m not referring to the pooch’s bath time.  I think the first mistake is asking Jager anything. Never give Huskies a chance to give you their opinion.

By the way, Jager is a cool name for a pooch. Oddly enough, every memory I have associated with Jager usually ended in a bathroom.

This whole fight started with the Husky eating that guy’s potato.  This canine doesn’t put up with any Human junk and talks back like a teenager.  I almost wish he’d jump up and eat the rest of that guy’s dinner.

This debating canine vid is proof that Huskies would make the best lawyers.  Seriously, canines must get so sick of all the questions that humans always ask them. I can imagine this K-9 saying, “Who the hell do you think pooped on the floor?” or “It wasn’t me unless you prove it.”

Could you imagine having another creature in this world giving you back talk?  Well, meet Steel, the talking back Husky.  He will definitely bark his mind!  Could you imagine if this house had a teenager in it?  Talk about brutal!

Are they the funniest canines out there?  Watching pooch vids always make me smile, but watching Talking Husky Videos makes me laugh out loud.  I just can’t stop watching them.  The only thing that makes these clips funnier is if you watch them with your 4 legged buddy.

If our pooches could talk, do you think they would tell the truth?  I’m not sure they would.  Especially when you ask them if they already ate.

Do you Want More?

If you want to see some younger versions of some Huskies, then we have some Husky Puppies.  Of course, this post also includes some pretty cool facts about this kicking breed. 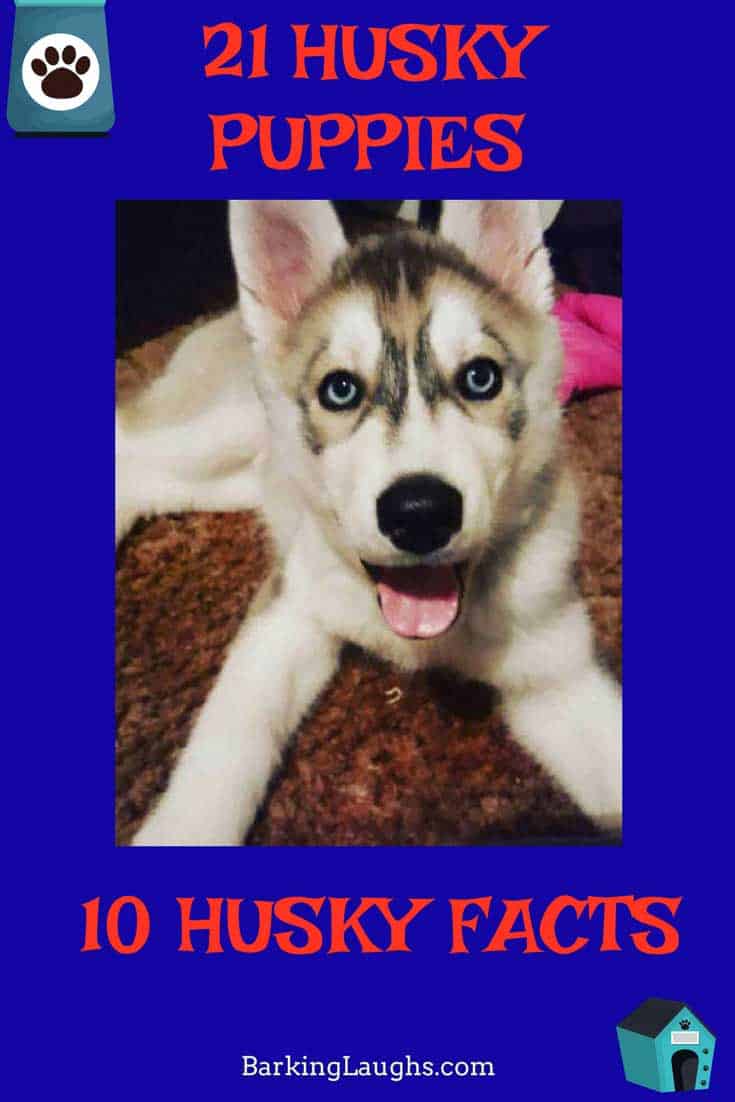 Additionally, we have more Pictures Of Huskies! 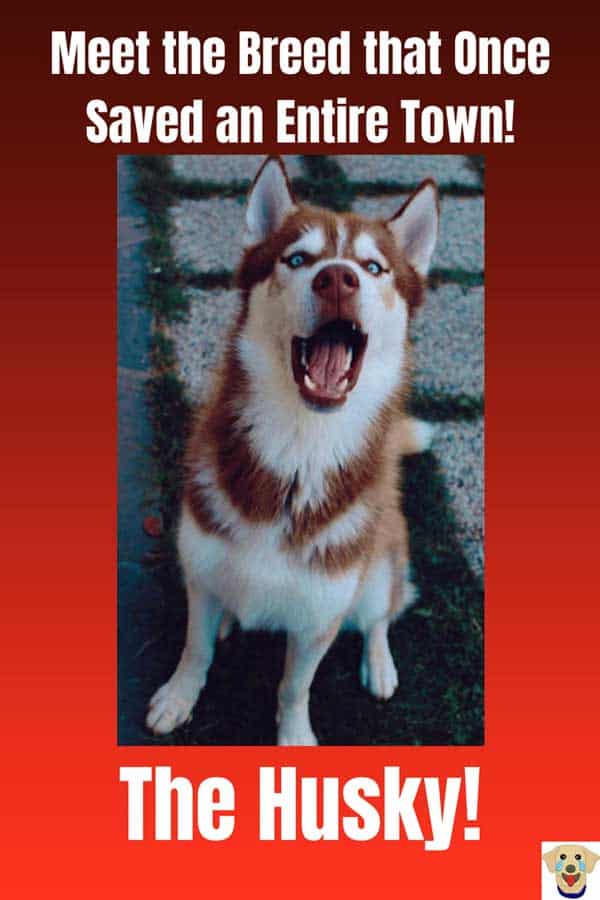 These 9 Funny Labrador Videos shine a little insight onto why the Lab is the number one registered canine in the United States.  Some of these vids are just crazy.  If you love Labs then you need to check out, Lab shaming or Lab puppies!

“Who did this?” is a question that every dog owner has asked at one time or another.  The expressions that the dogs usually give are priceless. But this Labrador Retriever is asked that rhetorical question after some clothes were destroyed and you won’t believe his reaction!  And I thought teenagers were bad.  Enjoy the response in this funny Labrador Reaction Video.

WOW! Could you imagine the mind of this Lab as this tennis ball shower is happening? It would almost be like someone throwing a mountain of twenties at us. The funny part will be when this Labrador manages to stick every last ball underneath the sofa.  I would love to try to recreate some of these Labrador videos with my Lab.  But I’m surely not going to go out and buy a hundred tennis balls.

A smiling Labrador Video?  Is there anything the Labrador can’t be taught?  How is this even possible? I can’t even teach myself how to smile on command, yet this pooch has it down to a science.

Meet Charlie the talking Dog in this funny talking Labrador video. It feels like he is mocking his owners and telling them exactly what he hears. It’s like my daughter when I’m giving her the 50th lecture of the day, and she just looks at me and says, “Blah Blah Blah.”

If your Canine had the power to speak for five minutes, do you think they would tell you how much they love you or fill you in on what you do wrong?

I’m pretty sure my pooch would immediately complain about the following:

What do you think your dogs would say to you?

What the heck! This is one funny lab video! I don’t even think I could do that on on a table that doesn’t move.  This is one impressive Labrador.  The owner is no slouch either, first the balancing, but more important the training that went into this.  I wonder how many hours went into the training for this?  Kind of reminds me of Jenga. I think that should be their next video. Place the Labrador in the middle of a few people and let them go at.  Do you know how many great Labrador Videos that would create!

Labradors are funny dogs!  Cali, the yellow lab, constantly wants to puppy play with anyone human.  But what happens when she is introduced to a horse?  Please enjoy this silly Labrador video of Cali as she interrupts a horse while he tries to meditate.

We’ve all seen those funny dog videos of downhill sledding without the sled.  This Sledding Lab makes it look easy sledding downhill in the snow.  Personally, I gave up sledding long time ago.  Getting wet and being cold really doesn’t make up for the ride.  Luckily, Labradors’ coats repel water, so I’m sure this canine isn’t that cold.

When you think of a water dog, you always think of a Labrador Retriever. This funny dog video will take this association to the next level!  Leave it a Lab to become the star of a funny Labrador Pool Video. How in the world was he able to steer the board and make it move without putting his paws in the water? Also, how was he able to make that landing on the board for the initial jump? Not to mention the dismount! This Canine Rocks.

Guess who had their alter-ego exposed in this crazy Labrador video.  Some funny dogs would just wait for their owner to come home and beg nonstop until they get their desired treat.  Not this one!  But then again he’s no ordinary Lab.  No!  It’s Spider Lab!  This is crazy!  It almost reminds me of my daughter climbing up on the counter to get snacks.  Scratch that, it DOES remind me of my daughter.

If you know someone that would love this funny Labrador videos, then be sure to share this post.   You can also become a fan or follower on our Facebook page.   We also have Pinterest Boards, so be sure to follow our stuff. Additionally, feel free to pin our images to your dog boards.